The Society was saddened to receive news that Roy Hodgkinson, a Founder member and Fellow of the International Masonry Society, and a Former Senior Principal Scientific Officer at BCRA (now Lucideon) died on 8th January 2021. He continued as a member until his death. He will be long remembered by those who worked with him from numerous companies, associations and many others in the industry, in the UK and internationally.

The obituary which follows was kindly prepared by his daughter Maggie. 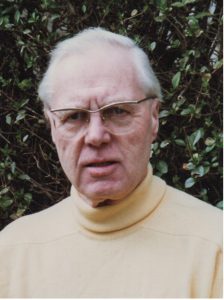 The Society was saddened to receive news that Roy Hodgkinson, a Founder member and Fellow of the International Masonry

Roy was born in 1923 in Newcastle-under-Lyme and was educated at Wolstanton Grammar School where he gained his Higher School Certificate in Physics, Maths and Chemistry.

During his school days he enjoyed building flying aircraft models and was encouraged in his studies of aerodynamics by the senior maths master. He hoped to pursue a career in the aircraft industry but this was frustrated by the war, and while awaiting his call-up, he joined BPRA (British Potters Research Association) as an assistant in the physics lab.

As soon as he was 18, hoping to become a pilot, he volunteered for the RAF but was rejected due to defective eyesight. He continued his evening studies for a physics degree until he was called to the army, where he was mustered into the Royal Armored Corps. When the REME was formed, it was realised that there was a grave shortage of engineers and other corps were trawled for likely lads. So, Roy was transferred to the REME and sent to the Royal Technical College, Salford on an eighteen month intensive course in mechanical and electrical engineering to degree level. On returning to active service, during a brief posting to Scotland, he met the girl who was later to become his wife. His final service in the army was as an instructor at Electrical Wing, REME Training Centre, Arborfield.

On demobilisation he joined the nascent engineering department of the newly formed BCRA (British Ceramic Research Association) and worked on a diverse range of projects including the assessment of semi-automatic machines for pottery production, dry pressing, extrusion, segregation of granular materials and electrical control of gas-fired tunnel kilns.

When Timber West took the post of Head of the Heavy Clay Division, Dr Astbury sent Roy to form an engineering department within the Division where his first task was to design and install the 1,000-ton wall-testing machine. His well-known lack of patience and constant demand that everything should be done yesterday resulted in the rapid build-up of a first-class team and, for example, during the crash test programs to vindicate perforated bricks, his team were building and crushing story-height walls at the rate of three a day.

When the Heavy Clay Division moved to the new premises at Penkhull, he collaborated with Barry Haseltine in the design of the structures laboratory and designed the testing rigs on the strong floor. He established the Division’s expertise in the testing of masonry ancillary components, wall-ties, joist hangers, straps, dpcs etc. and served on the relevant BSI committees. He was heavily involved in the gas explosion testing at Potters Marston and undertook the structural testing part of the development of SLM, (single-leaf-masonry).

On the production side, he was involved in the development of the M-G Plank and designed a novel drier to permit large drying shrinkage. His love of music had engendered a knowledge of acoustics so he led the small team investigating the sound insulation properties of brick walls. During his time in the Heavy Clay Division, his team built and tested over 2,000 one and two-story walls as well as many thousand smaller masonry specimens.

In 1949, Roy married Mary who shared the two great loves of his life, music and the Scottish Highlands. They had a son, who died at birth and a daughter, Margaret. Early in his retirement he cared for Mary during the long illness that led to her death in 1997. Then, for the next 23 years, he enjoyed many trips to various European countries with Margaret and her husband and pursued his many hobbies including model building, photography and industrial archaeology (for which he was in much demand as a lecturer to historical societies and other groups). Music also continued to be an important part of his life – he said he “played the piano badly, the organ even worse and the gramophone somewhat better” – and so it was entirely appropriate that his funeral service, which was ‘attended’ on-line by some 80 family, friends and colleagues, included music by his two favourite composers Sibelius and Mahler. A Memorial Service will be held at a later date.